Hi! My name is Tammy
I'm also an Alchemist, Box Cutter, Guide, Translator & Life Enigmatologist
With a history of childhood abuse and trauma, I began traditional Counseling at age 16. Then spent the majority of the next 30 years with various Counselors. I pushed back and refused medications for another 14 years, until just after the Oklahoma City bombing where I lost friends. On top of my already severe PTSD (which had become c-PTSD), I began to shake externally and finally gave in to the meds. At that point, I was on/off medication for the next 17 years. Around 2002, I began to get a series of physical diagnoses (requiring a spreadsheet to track) & prescriptions (that were roughly $500/mth in copays). Several diagnoses came with the “you’re not going to survive” warnings. Between procedures, and tests and surgeries, I thought I might lose my mind if I saw one more “ologist’. It felt like every time I turned around, I was facing another death sentence. What the hell is wrong with me?!?! I was rapidly beginning to be fed up with the whole process.
Around 2003, I began studying the Mind-Body connection and became fascinated with what I was learning. I was still so sick. Around 2005, my body started shutting down and my weight had skyrocketed (after quitting a 2.5 pack/day smoking habit) and gastric bypass appeared to be the only option that would save my life. I was doing great for awhile until I started repeated more and more of my coping patterns. In 2010, I was rushed to the emergency room with gangrene in my intestines and moments from death. It was time. It was time to put ME on top of my priority list. In 2011, I found Mindfulness Meditation. In 2014, I set out on an adventure that took me to Arizona and I went through a Spiritual Awakening that turned my world upside down. The Awakening came with a calling and a mission that I was to Empower, Motivate, Inspire and Transform the lives of others using the stories of my life.
As a child with a lot of abuse and trauma, a former Private Investigator, a former Federal Analyst along with a Masters in Counseling and a Healing Arts education, I’ve been called “the box cutter”, “the translator”, “the life Enigmatologist”, “the Alchemist” and so much more. As someone who is from Oklahoma, I know what it’s like to not fit in, to deeply desire something MORE. It is vitally important to me to turn my pain into purpose and I created the Practitioner, I could never find. With a combination of Spirituality, Practicality, Psychology and a bit of the Woo Woo, I take everything I have learned on my incredibly painful journey and walk with people through the HOW of turning your life from shit storms to Soul purpose. Thanks for being here! Let me know how I can support you on your amazing journey. YOU are Enough and your light is ready to shine.
When you are truly committed to your own growth... 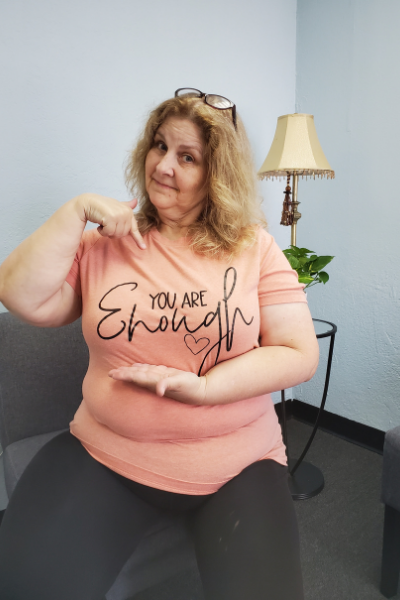 Book a Free Consultation
The things people say...
"Tammy Coin! YOU are the box cutter, you came to let the rest of us out!"
Confidential - Moore, OK
"TY again!! The work you did on me years ago, started my journey that TODAY, I officially feel. It's been brewing but it's hit me today!! You're so amazing!"
Confidential - Elk City, OK
"I'm now finding myself using so many of the tools that Tammy taught me. I find myself saying 'I can't believe I can do this'. But these lessons and tools will be with me for the rest of my life and I know how to use them."
Confidential - Watonga, OK